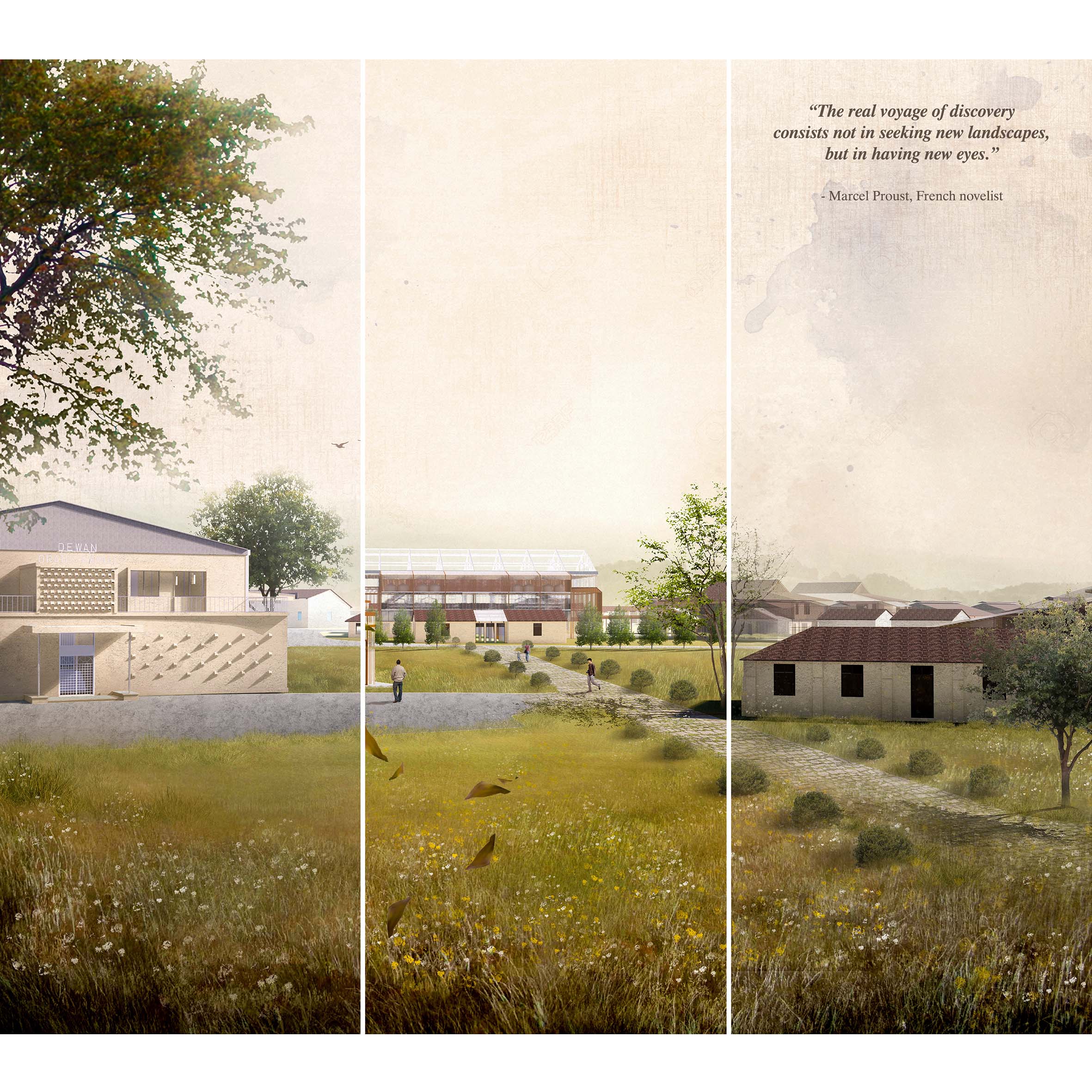 A Chronographic Blueprint: Reinstating the Valley of Hope, Sungai Buloh

Mono No Aware, an awareness of impermanence, also refers to the instant sensitivity towards the ephemera. This ephemeral nature of beauty- the quietly elated, bittersweet sentiments are inherently linked with the theme of heritage conservation, paradoxically. To search for timelessness in architecture always become embedded pursue of a designer, yet not one architecture can escape from its age, dilapidating and decaying eventually. The thesis aims to challenge this preconceived notion of timelessness- often perpetual and static, questioning the temporality that lies within our built environment.

Therefore, it is a story about time, about changes, about the curated growth of artifice, nature, and history.

It is a story described in four different timescales, in four chapters.

The prologue reveals the research and design framework beforehand.

Based on the ethnographic survey, known as ‘Valley of Hope’, Sungai Buloh Leprosarium once had a prophylaxis past. Since its establishment in 1930, the Leprosarium is currently a 90-years old living heritage born upon an epidemic tension. It thrives as a self-supported community with a long history of conforming, confronting, and compromising with nature. This process is analogous to the cyclical process of damaged and recovery lies within the patients, the landscape, the artifices, and the heritage.

In the field and contextual survey, it discovers a dissolving heritage landscape and evanescence of its legacy, including the artifices, nature, and history. Due to the shrinking population of the original community, the settlement has gradually fragmented of its uses and imageability. The West Section is formally used as an integral part of the Sungai Buloh Hospital. Whereas the Central Section is mainly a living quarter and horticulture hub but mostly ruined and left vacant nowadays. The East Section is intact of its Garden City layout, including the communal nave, the decrepit wards, and diverse archetypes of vacant heritage buildings and ruins. To initiate the reinstatement of the Leprosarium, no area was more so representative of an existing monastic nave that remains the interactivity of the indigenous inhabitants.

However, through the survey of a collective quest between the stakeholders, it implies the dichotomized perspectives within. The authorized proprietor, Ministry of Health Malaysia is seeking to foster the progression of the heritage with new programmes. The Community Council of Sungai Buloh Settlement is concerning the mnemonic safeguarding for civic mnemonic instead. While the leprosy inmates at their last generation, are all about recollecting the virtues of their lives. The communities around and public are passive on the other hand, perceiving this place a possible reciprocal part with surrounding institutions apart from its medicinal and horticultural dimensions.

By aligning these surveys at conjunction, the design thesis is shaped to envisage 3 objectives: (1) the ideological objective- to construct a new perspective towards timelessness in architecture by speculating the changing relationship between artifices, nature and history; (2) the design objective- to reinstate the tangible and intangible heritage of the Leprosarium with a set of time-based interventions in a manual of renewal; and (3) the programmatic objective- to create a reciprocal platform in a chronographic blueprint which reacts to a changing programmatic framework. By inventorying the data collected from various contextual spectrums, it becomes a critical tool to inform the multiscalar decision-making in the thesis- unraveling the enigmatic perceptions to tangible measures.

Anchored to this framework, the thesis begins with reciprocal programming and chronographic planning. Inherent from its medicinal past and horticultural present, the reinstatement of Sungai Buloh Leprosarium is projected into the making of a Medicinal Horticulture Research Frontier for the years to come. It consists of the peripherals of the atlas (landscape department), the antiquarium (visitor department), the cerebrum (research department), and the artery (education department). They grow gradually as part of a coherent system to connect with the surrounding context, sharing the reciprocity between the other medicinal, education and horticultural facilities around.

In the belief that conservation of heritage is not about plain and static restoration work, the thesis suggests a curation timeline instead, with a manual of renewal reacts to those archetypes involved in the heritage landscape. Here, the conservation is not only an appreciative gesture to embrace the past, or an immediate strategy reacts to the present matters, but a continuing resolution to reinstate the Leprosarium through the test of time. The concept of timelessness is shifted, where the only permanent is impermanence.

Concentrating on the chronographic restoration and reinstatement, the curation timeline is orchestrated as the backbone of the project. The choreographed timeline encapsulates the selected urban artefacts involved with the intervention designs chronologically. Derived from this timeline, a manual of renewal is mapped out where the designated details and rules of integration are adapted to each artefact. A blueprint of renewal emerges, exploring instances to transform and reinterpret these artefacts at intervals to reclaim their purposes. The manual itself act as a didactic methodology to cultivate a curated transition.

The first chapter unveils a story about inhabiting landscape. Focusing at the ruinscape area that was deserted upon the decrease of the native population, this design phase is pioneered by the communistic initiation with bottom-up strategy to reclaim the wild stretch. The ruined chalets are restored as tiny greenhouses complementing a community herb garden, whereby the dilapidated structures are upcycled into various gardening modules. An empty pavilion-style building is turned into a barn depot supporting the herb garden as a service and storage centre. A productive landscape is cultivated here.

The next chapter portrays a monastic enclave that cherishes the late livelihood of the inmates and acknowledging them as part of the cultural heritage. Reused from the existing pavilion-style building, a locus to gather virtue of their lives by relocate them under a same roof of rehabilitation centre. The renewal also focuses on the community hall, to elevate it become a commemorative monument, with a pre-function area and hanging gallery to reinstate its public entrance leads to a hidden gem afloat. At the same time, the herb market and farm-to-table restaurant are introduced for socio-economic interactivity which is cultivated locally. Besides, the observatory trail is being introduced as an archaeological territory of the Leprosarium.

The third chapter is followed by the formation of a research frontier. Over a decade followed by the fading of the inmates, the Leprosarium shall return to its authority with reinstatement for a medicinal research purpose. Engulfed with translucent envelope, the vacant pavilion is transformed into an herbarium, a centre for conditioned nursery and research activities. It traces the typology of a greenhouse integrated with specialized infrastructure for various herb species. Whereas the former detention centre is reused as a specimen gallery adjacent to the herbarium. In addition, the laboratory collectives are integrated with the heritage landscape, pivoted to the existing Hydnocarpus Tree which was celebrated as a treatment to leprosy in the past.

The fourth chapter epitomizes an inheritance of knowledge, legacy, and memories. The former rehabilitation centre is retrofitted with a mezzanine attic floor to become a library and information archive. The academic collectives are organized in a linear vessel to connect two old buildings. which the lush landscape of the intact Garden City layout should illustrate a campus-like atmosphere. It forms as the education department to engage with the student, medicinal and researcher community or even broader public.

Correspondence to this approach, the architecture design is constructed as a narrative body to those relics of past and traces of times. The restorative architecture adopts a combination of fleeting and transient materiality, touching the heritage fabric and landscape extremely lightly. This idea of assembly and disassembly minimizes the impact and footprint to the heritage, enabling them not only to be disappeared decades later, but also easily decay as part of nature within a designated timeframe. Design is complementary to the protagonist- a tale of ephemerals within the artifice, nature, and history of Sungai Buloh Leprosarium.

Throughout this project, we have undergone a journey of change, transience, and growth. The past, present and future aligned as the heritage come in a full circle. From a former prophylaxis settlement, being transformed and inhabited as a medicinal horticulture research frontier in years to come. Century later, it will return into ruins again where nature would have reclaimed its ground which is once its own.

The Leprosarium is now alive- it is both the old and new, the past and future, the decay and growth. It is a portrait from Leprosarium to Vivarium.

“The real voyage of discovery consists not in seeking new landscapes, but in having new eyes.” – Marcel Proust, French novelist

2 thoughts on “FROM LEPROSARIUM TO VIVARIUM”